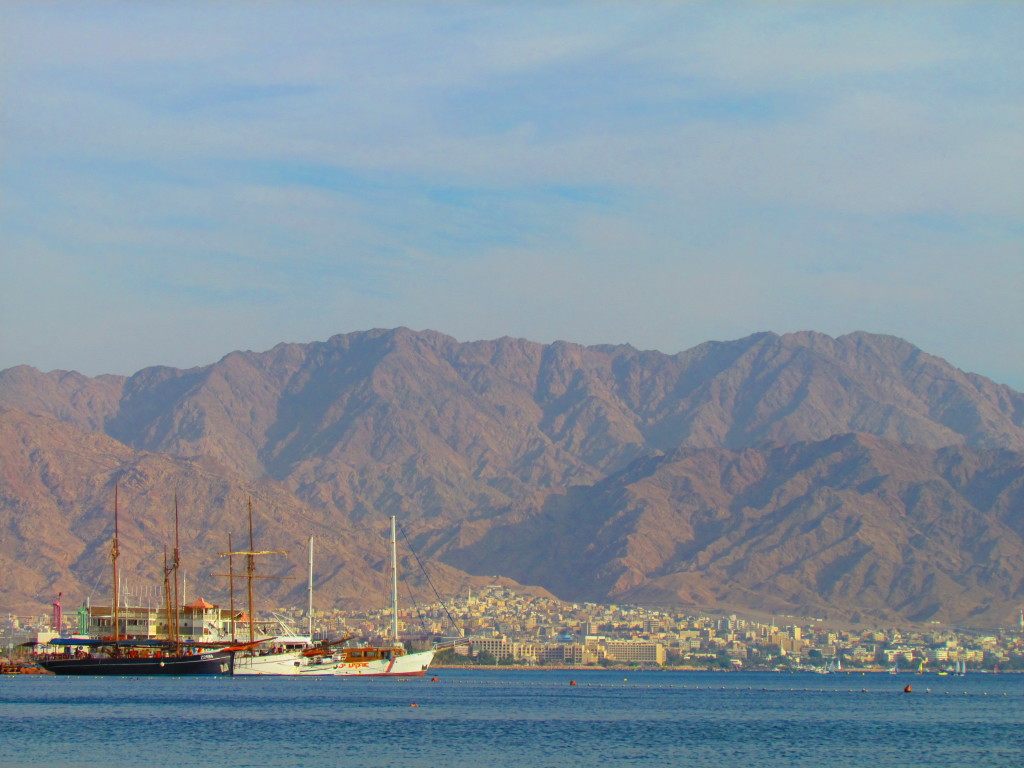 As all good things must come to an end, so did our sleep, disturbed by the alarm from hell.

I wasn’t really tired, so I decided to have my morning coffee on the terrace to watch the sunrise over Tel-Aviv.

The initial plan was to visit Israel and spend a few more days before heading to Jordan, there was just one minor detail we didn’t take into account, the Shabbat which, in layman terms, means stores and transportation would be closed from Friday evening until Saturday at noon, cutting off more than two days from the trip.

Well, if it’s Shabbat, we might as well head to Jordan and see the best it has to offer, the easiest way to do that would be to take a local bus and head to Eilat.

The quality of the buses is not bad, nothing compared to the ones in the Baltics, but hey, we are in the middle east, I wasn’t expecting much, but Wi-Fi on-board is not half-bad.

Luck would run out very quickly, in just 10 minutes after leaving, the Wi-Fi would break down, with 6 hours of road ahead of us.

The scenery was awesome, but after one hour of desert, things get old very fast, but I wasn’t going to lose any sleep over this and so I did what I know best, thanks to my Chinese friends, the ability to fall asleep almost anywhere as long as there is a chair. 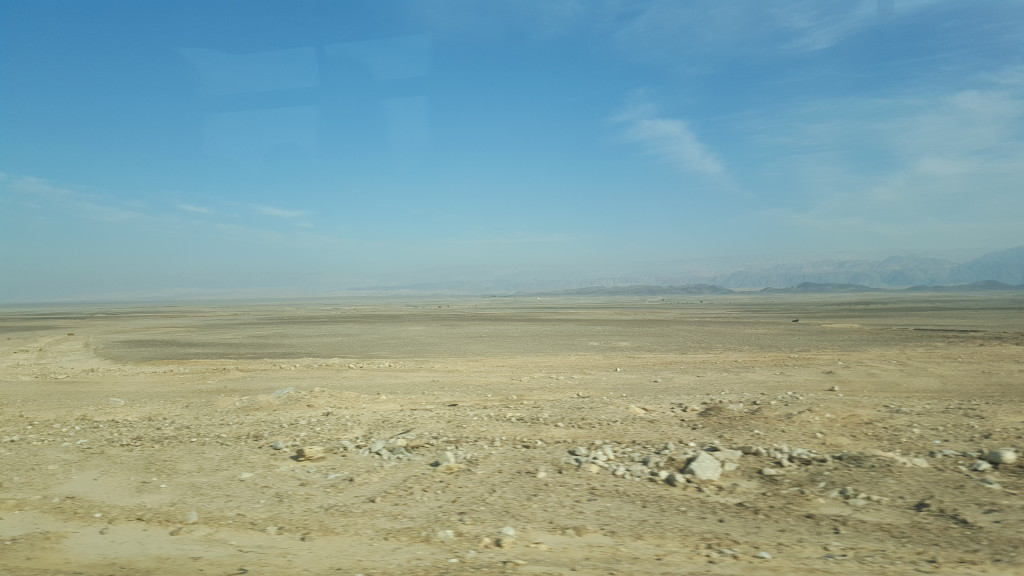 Several dreams later, we woke up to the bus parking in the station, in the beautiful city port of Eilat near the Red Sea.

The sea in front of you, surrounded by the tall red cliffs and basking in the sun, it’s not every day you can enjoy something like this. 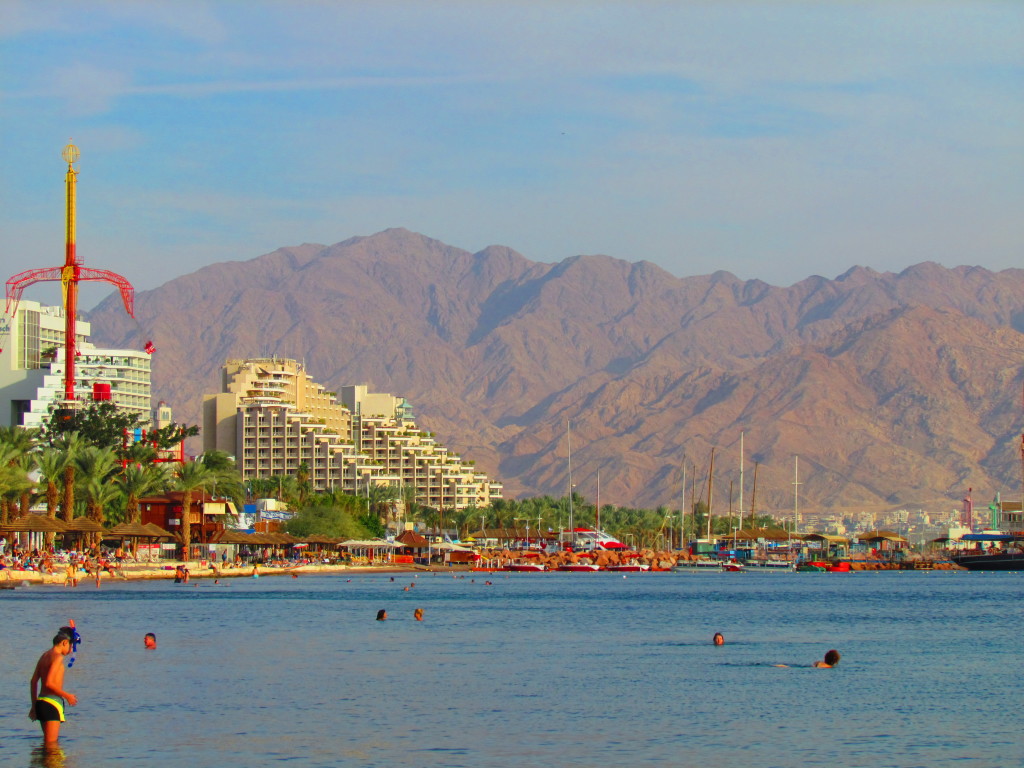 We were 5 KMs from the Jordan border and with enough time to spare to enjoy a cold beer on the Red Sea beach of Eilat, with one foot in the hot sand and another in the warm water, as I’m writing this article, it’s -10 degrees Celsius outside and snowing heavily, what I wouldn’t give to be back in Eilat at +25. 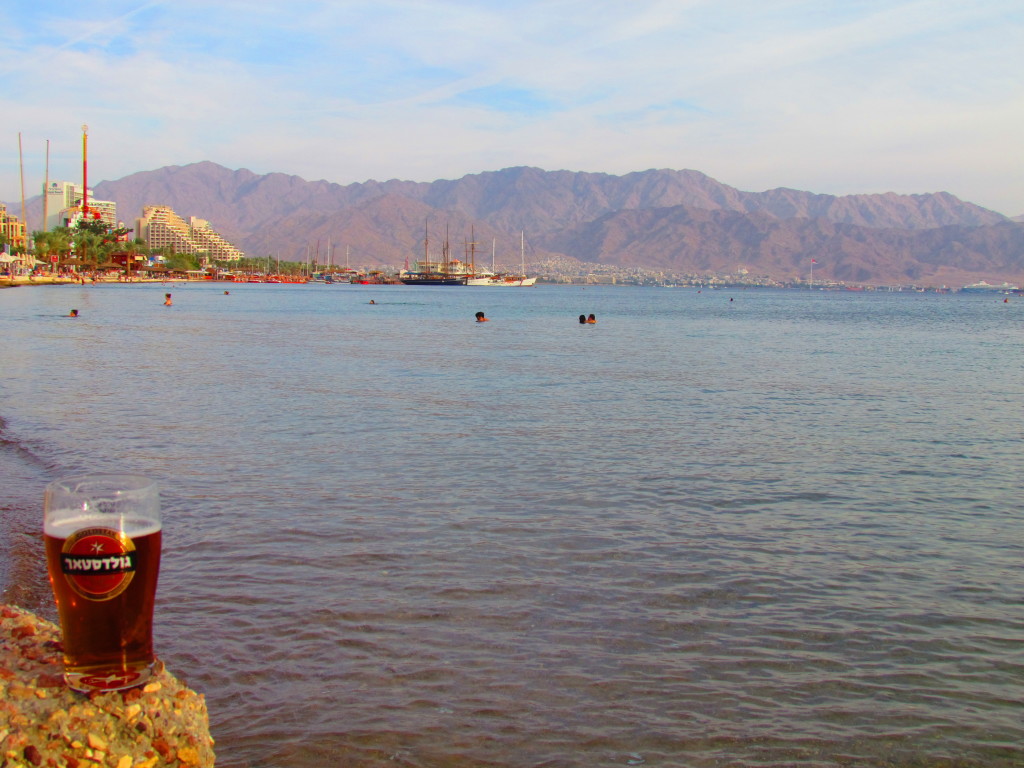 One beer and a photo session later, we decided it was time to try and cross the border; from our previous Tel-Aviv experience, we didn’t want to take any chances for the border to close without us passing through.

We took a taxi and arrived in what seemed to be an easy border crossing. If someone would have told me “brace yourself, the Israeli-Jordan border is coming” it would have been the funniest thing, but now that I have gone through the process, I know how lucky we were.

As we arrived the sun was setting gracefully upon the red cliffs of Eilat. 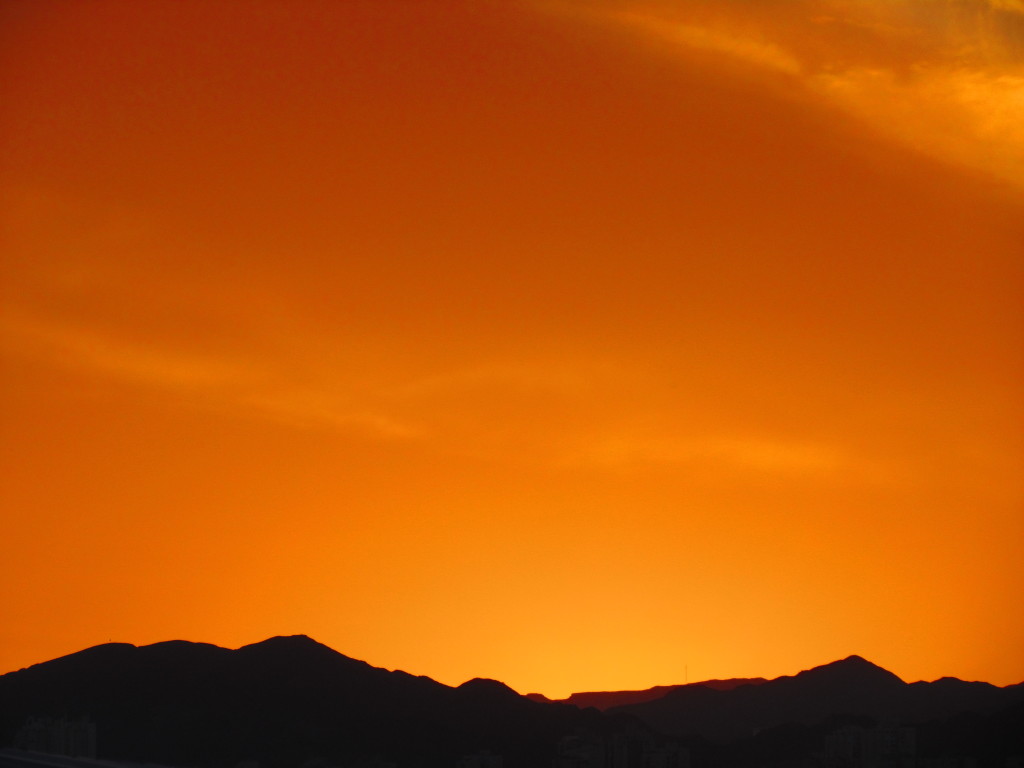 To sum it all up in a few words, first you need to pay a few taxes, get your passport stamped (not something you want, if visiting Iran and a few other countries is a plan in the near future ), by the time we realized that, it was too late.

Exiting Israel, you reach the Jordan border, where bureaucracy is a thing and as a person from an Ex-comunist country, I can tell you a few stories, here the bureaucracy was more than a bad dream.

First thing you need to do is visit the Tourist Police – there is a law which states if you have an organized tour in Jordan you don’t need to pay the visa (normally I wouldn’t be bothered by the visa process, but when the cost for a visa is 70 euros, I give it a few minutes of thought).

By no means did we have any organized tour in Jordan, needless to say, no tour guide as well.

Maybe it was the big smile on our faces, the Shabbat, or the good coffee the man had in the morning, whatever it was, after 10 minutes of talking and a few phone calls, we convinced him we were an organized group and he waived the visa fee.

10 visits to different offices and 5 visa stamps later, we could finally enter Jordan.

At the Jordan border, we fell for the first tourist trap, the overpriced taxi, which did indeed charge us a 50% more, but it took us in front of our hotel in Aqaba (yes, the Aqaba from Lawrence of Arabia).

In the distance you could see the bright Eilat lights, to the left Egypt and further Saudi Arabia, a beer was needed for this terrace, but first food.

Once you reached the main street, you could feel the buzzing and the Jordan way of life, people going about their daily lives, which seemed so different from ours, not in a bad way, but more along the lines of interesting and then the Muezzin hit us and we knew we were in the right place. 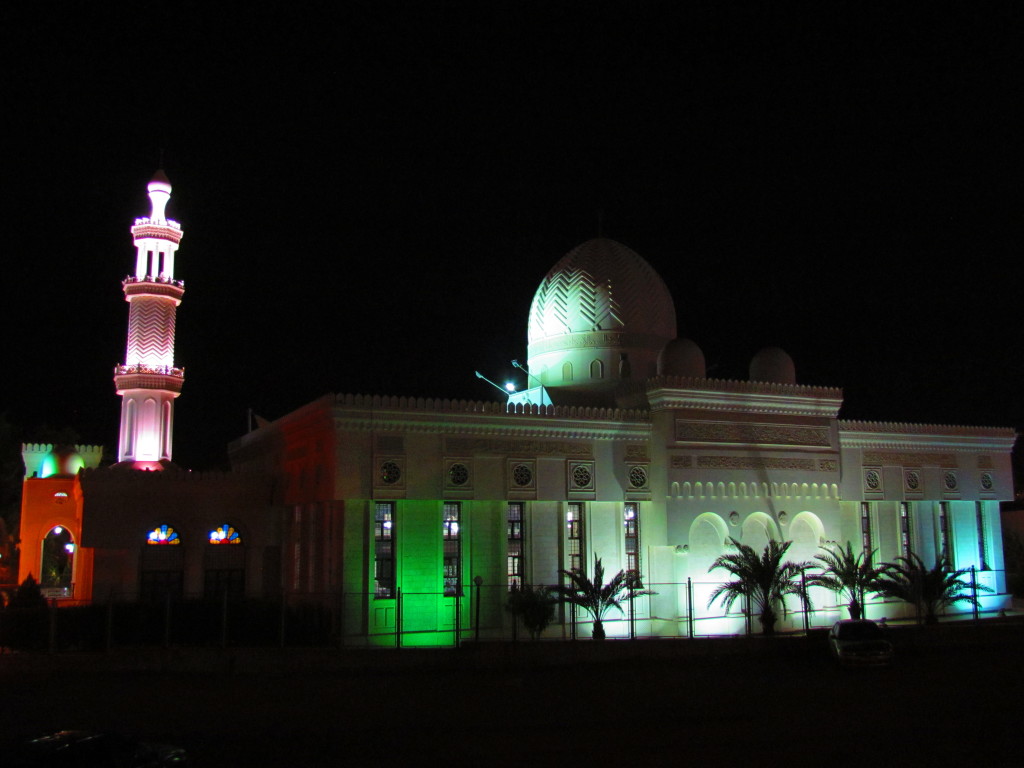 Impressed or not, we were hungry and the nice gentleman from the hotel reception recommended a “local place”. But first, we needed money; what is surprising, we found several exchange offices with the normal no fee exchange rate.

This is the second country visited in which the local currency is stronger than Euro, the first being UK.

With Dinars in our pockets we went to the “local place”, I was expecting a very touristy place, but in fact only local people were eating there when we arrived.

The menu looked as you would expect, Falafel, Shawarma and Kebab as the top dishes and tons of Salads the names of which I cannot recollect even if my life depended on it.

Since we had such a large selection, we decided just to order all of them or at least 2\3rds, because there must have been more than a dozen choices.

In all Arab countries I have been to, alcohol is not served in restaurants, Jordan was no exception, no problem they had the widest selection of fresh juices, any fruit you can name, they had it.

For what it’s worth, I’m a big fan of Falafel, Shawarma and other such foods, but having the opportunity to taste them in one of the countries it originated from, everything was better, the smell, the flavor.

Several pounds of food later, we made our way to the beach and decided to have a long walk to relieve some of the pressure.

We were thinking about the people back home and wanted to do something very arrogant, what could be more arrogant then smoking a shisha on the beach and drinking sweet mint tea while the Red Sea breeze blew through our hair. 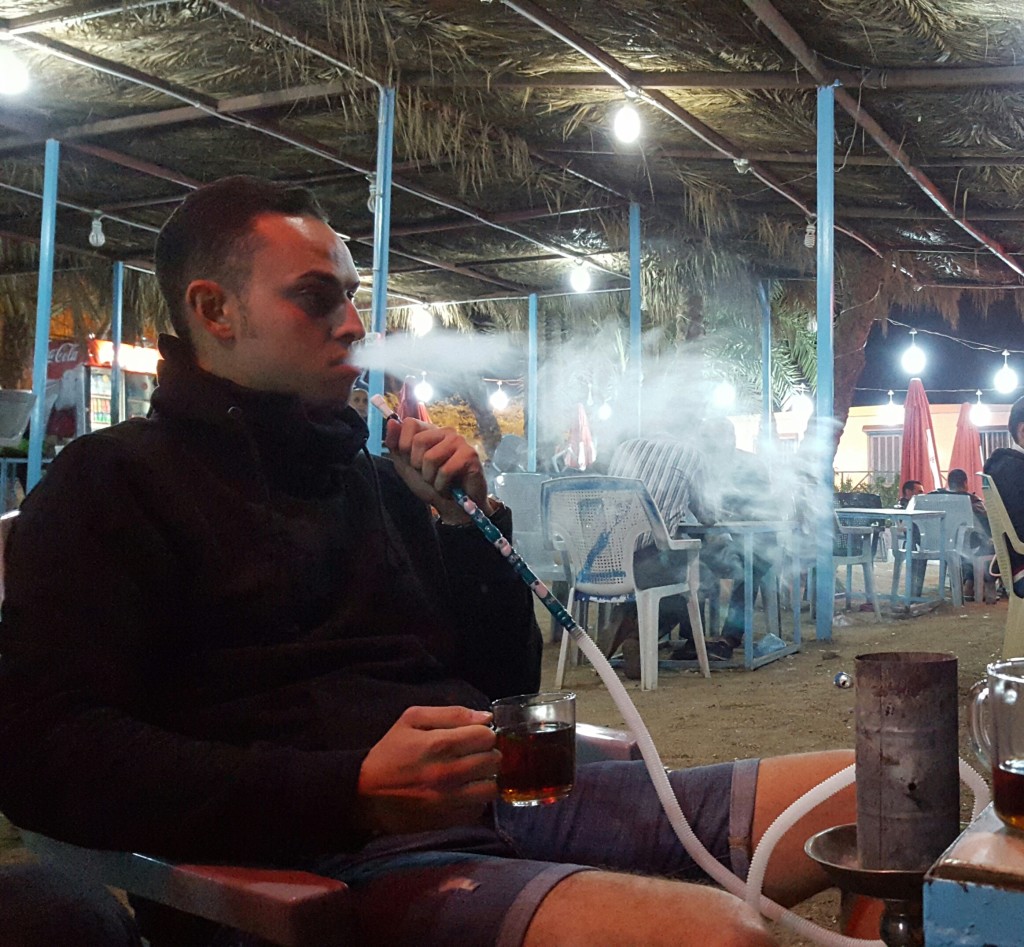 This was the most relaxed I had been in quite a while and I wasn’t the only one, it was time to go to bed since the following day we were going to have another exciting adventure.

On our way home, we found a few shops to buy souvenirs and one that truly was important for the desert adventure, the alcohol shop. (In Jordan, if you want to sell alcohol you need to be a Christian in order to get the necessary  license)

There was a large selection of local spirits and craft beers, we decided to buy a few beers and taste them in our rooms.

On our return, the receptionist had finished booking our seats for the desert adventure that would unfold in less than 24 hours.

Since alcohol drinking was not permitted on the rooftop terrace, we drank the beers in our rooms and headed on the rooftop for the most amazing night view of Jordan, Israel, Egypt and Saudi Arabia. 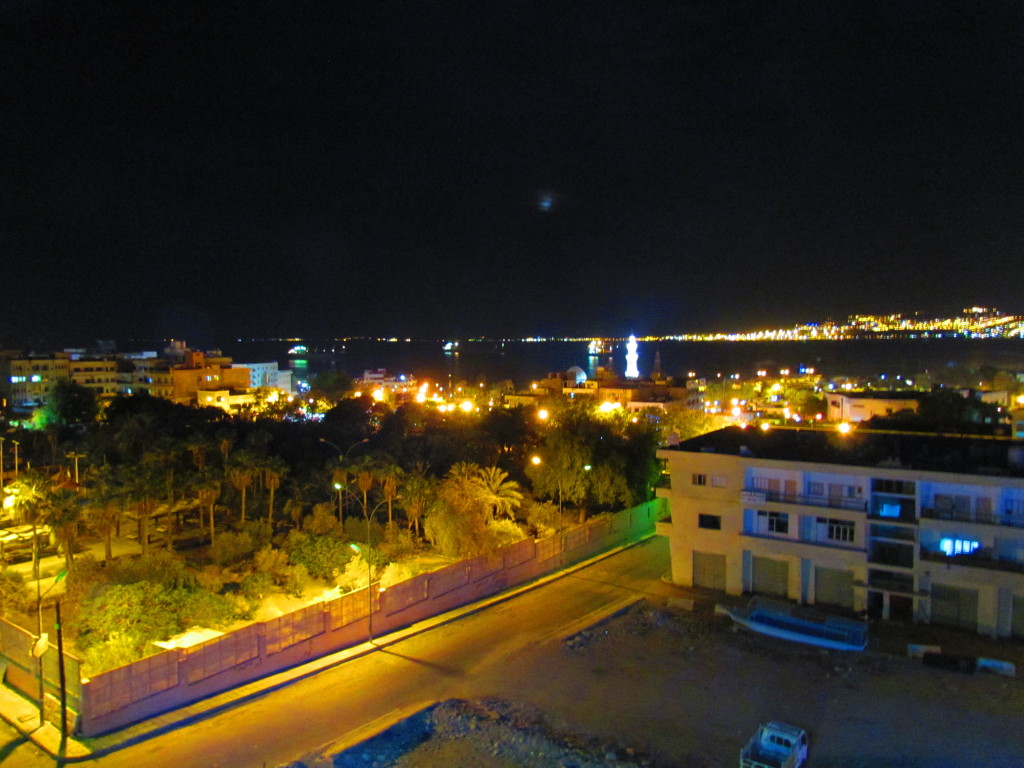 It was a fitting end to another full day and the next day we would go to Wadi Rum to experience the Beduin life.