Some time two years ago, I had the trip of my life, by going to the North of Africa and experiencing what I like to call, the Arabian dream in Morocco.

Time passed, new and better experiences made their way into my memory, but the feeling of endless freedom couldn’t be appeased, no matter how much I travelled in Europe.

It was time to scratch my travel itch with a new journey. 2015 was a year full of travels, but all of them have been inside Europe. Don’t get me wrong, I am thankful for all the opportunities presented, but none of them really hit the spot for this year.

Last year it was Morocco, Tenerife and China, I would at least have to match if not surpass the adventures of 2014,with that in mind what better idea than visit Israel, Jordan and Palestine in one go.

I knew the destination, but what about the travel dates, the accommodation and last but not least, who would be crazy enough to go to Palestine with me ? :))

In a chance of fate, a more seasoned traveler(CalatoresteHaihui) proposed the trip in my stead, just like that, two of my problems evaporated.

In a matter of days, people signed up for the trip, the schedule was more or less established and the travel dates chosen for the second half of November.

All we had to do, was wait for the day of departure to arrive, and just like that 19th of November had arrived, 5 A.M. Otopeni Airport, gate 22, our adventure into the biblical lands would start.

I don’t know how many of you are aware, but Israel is a mere two hours and several checkpoints away and if you don’t fall asleep on the airplane, you can see the beauty of the Mediterranean Sea from the sky.

While the flight was mainly standard, the arrival procedures are not.

In the off-chance you are a non-English speaking person, your life will turn into a Oliver and Hardy silent movie, the passport control officer will try to ask you some question in a language you know nothing about or via signs, if you actually manage to understand what she wants from you, there is still the small matter of explaining to her in a ROM-English or sign language what you are doing in Israel, how long you are staying and what you want to do later on.

All is not so bad, you can always find a nice person to help you pass customs – another strange fact is they don’t actually stamp your passport, they give a card that will serve as an Identity Document until you leave the country. This happens mainly because if you have an Israeli visa in your passport, you will be denied entry into countries like Iran, Libya or Iraq – as far as I know, Jordan is the only country who has an open border to Israel.

Finishing up with the customs, we went to the central station to take a train.

There are many things that should surprise you in Tel-Aviv train stations, the palm trees, the exotic birds or what one of our travelling companions called “Scouts”, or this guy who is playing music on a instrument I have never seen. 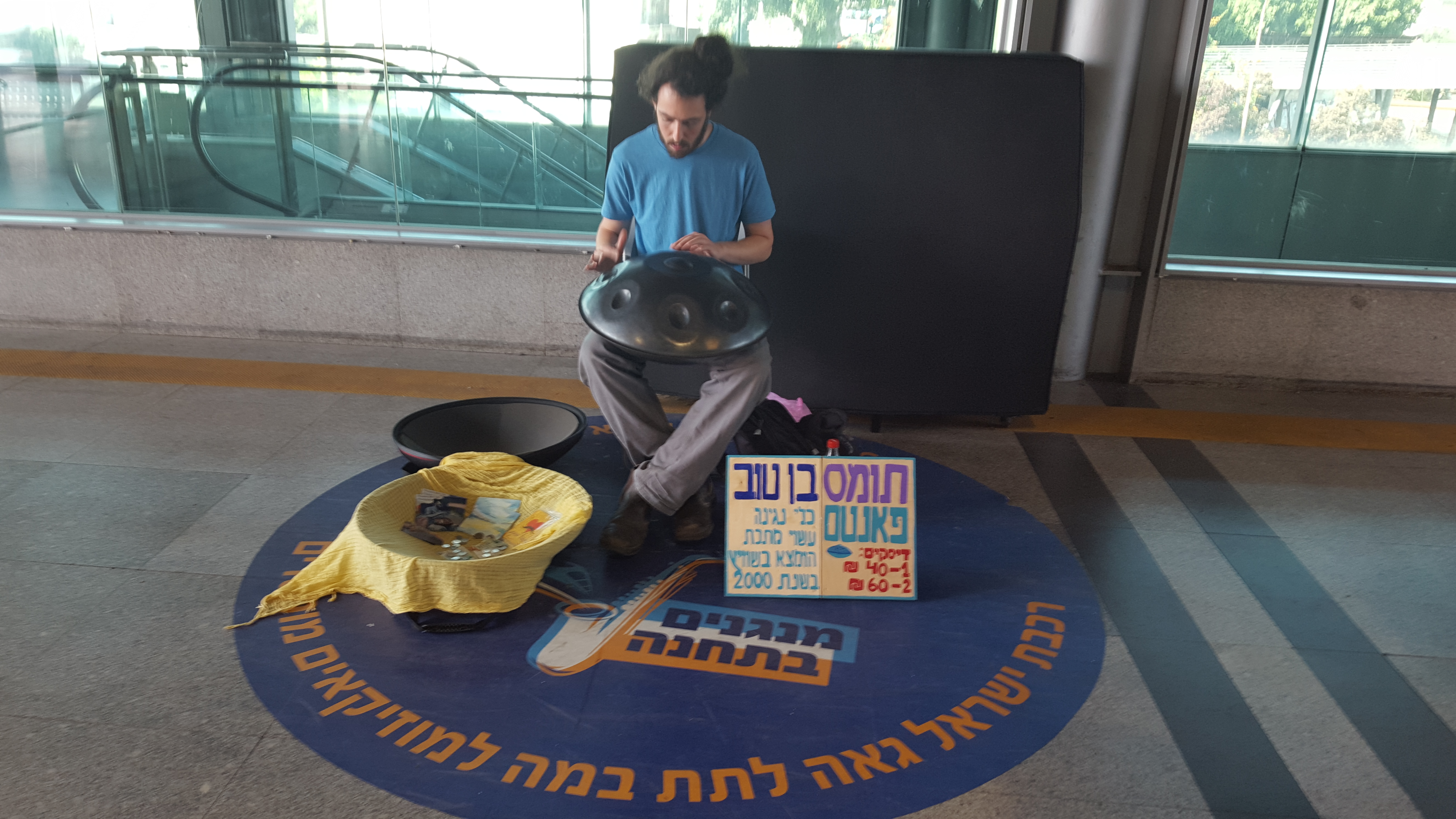 Technically speaking, what we call “Scouts” are soldiers, women and men alike who are almost always carrying Ak-47s, just in case you were thinking on hitting on one of them, just remember, they can and will shoot you for the wrong reasons.

To my surprise, almost all cities I have been to that are not in the EU, have excellent city-wide, Wi-fi coverage, this makes it very easy to get around with Google Maps.

As such, it was pretty easy to find our accommodation using the GPS, unfortunately for us, Tel-Aviv is a big-ass city, and it takes 30 minutes by foot to get from the Hostel to anywhere (beach, central station, decent restaurant).

Having arrived way too early for the check-in, we decided to leave our bags, have a nice cup of coffee on the house and enjoy the awesome rooftop terrace on top of the hostel.

The part I like about hostels, is the diversity of people, the flow of information and awesome tips of where you can eat the best Hummus, get cheap alcohol or enjoy the best sunset and last but not least, the feeling of being connected to the world.

Having left our backpacks, we changed into appropriate outfits( it was a stunning 25 degrees compared to the 7 we left behind in Bucharest), got a city map and headed out to explore the new city that lay before us.

Remember when I said it took you 30 minutes to get anywhere, that’s exactly how long it took for us to find an exchange. Finding an exchange where they don’t ask for a commission is not very hard, but the biggest surprise was the guy answering in Romanian, although not a perfect response, but hell, how many places you can visit in Asia and people hear you speak Romanian and answer in the same language.

If they didn’t have the arabic numbers written on the bills, you coudn’t tell heads from tails. 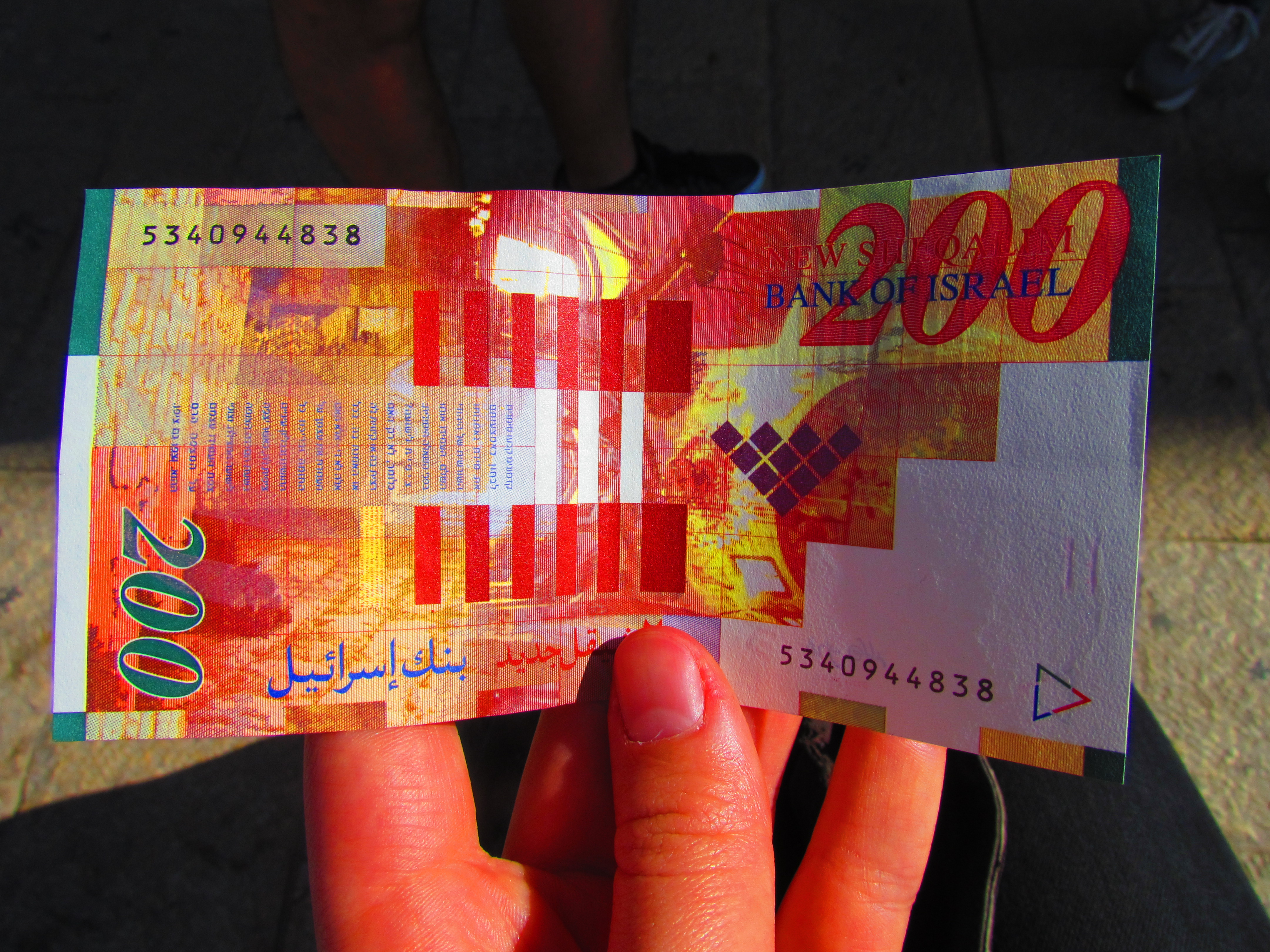 Finishing up with the exchange,we heard a strange but familiar sound, the Ezan (the call to prayer  for Islamic religions ), it was then we knew the figurative Dorothy was not in Kansas anymore. With a familiar feeling in our heart, we headed to the most awaited objective of the day, the hummus restaurant.

In my mind, the only ones that have been truly capable of setting up a table up until now, are the Greeks, but this was about to be proven wrong.

In minutes after our arrival, the table was set, cutlery was put on the table, pita, onions and lemonade, although it took another 5 minutes for the 3type hummus plate to arrive, I was overwhelmed with the overall efficiency being a very greedy person, the smell of food was enough to make me drool. From the moment the dishes touched the table, no sound was passed among us, the traditional Israeli dish was finally in front of us. 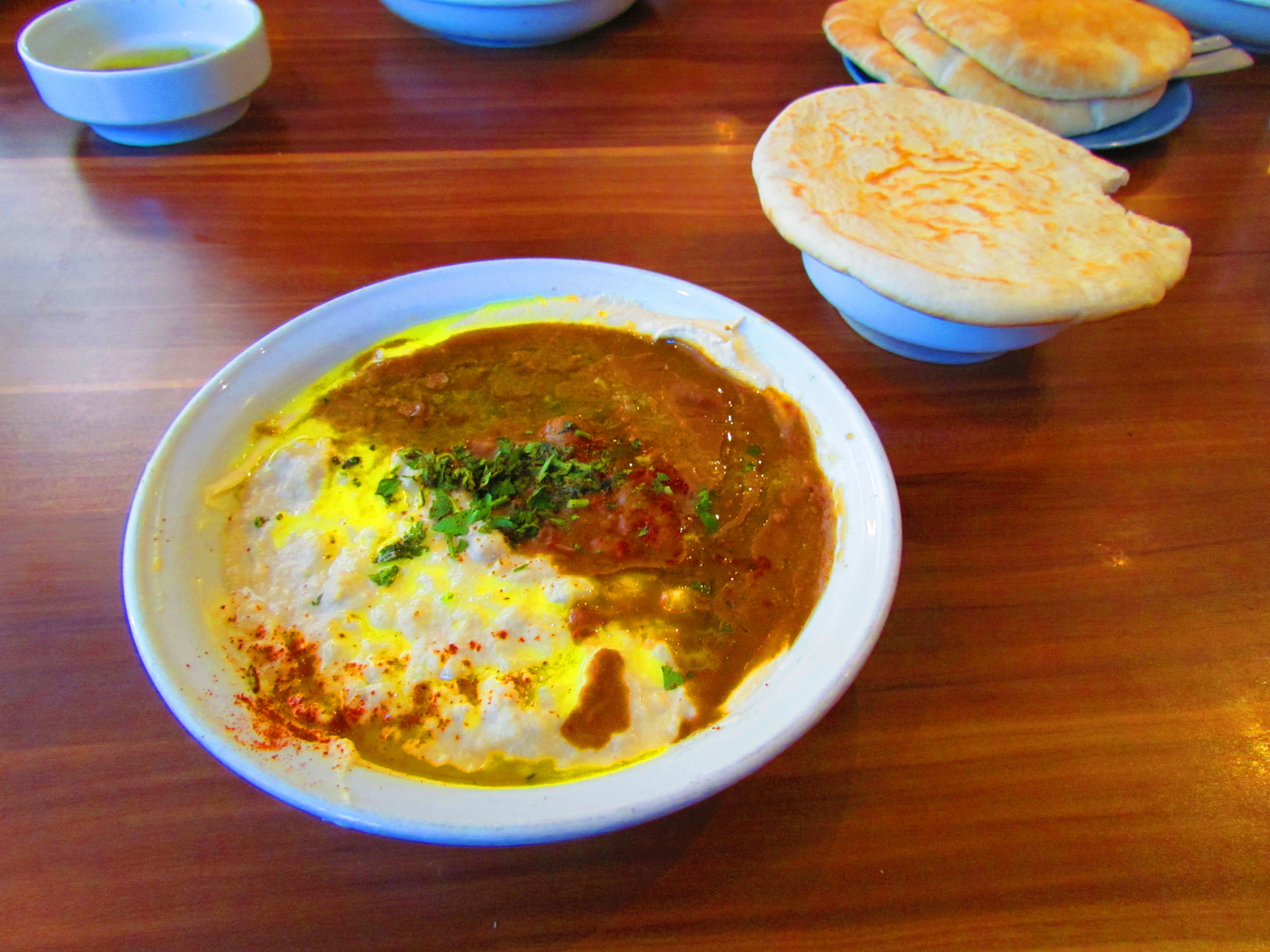 With two of our most basic needs satisfied, we were prepared to be tourists in the most sincere way, visit and take pictures.

The number of things we could do in Tel-Aviv was quite high, but of course, like people coming from 5 degrees weather we made our way through Tel-Aviv Jaffa ( Jaffa is famous for its association with the biblical stories of Jonah,Solomon, and Saint Peter as well as the mythological story of Andromeda and Perseus ).

The feeling of walking through sun-filled ruins that have stood witness to centuries of history is not something we can easily describe, but then again, places are best felt by direct experience. 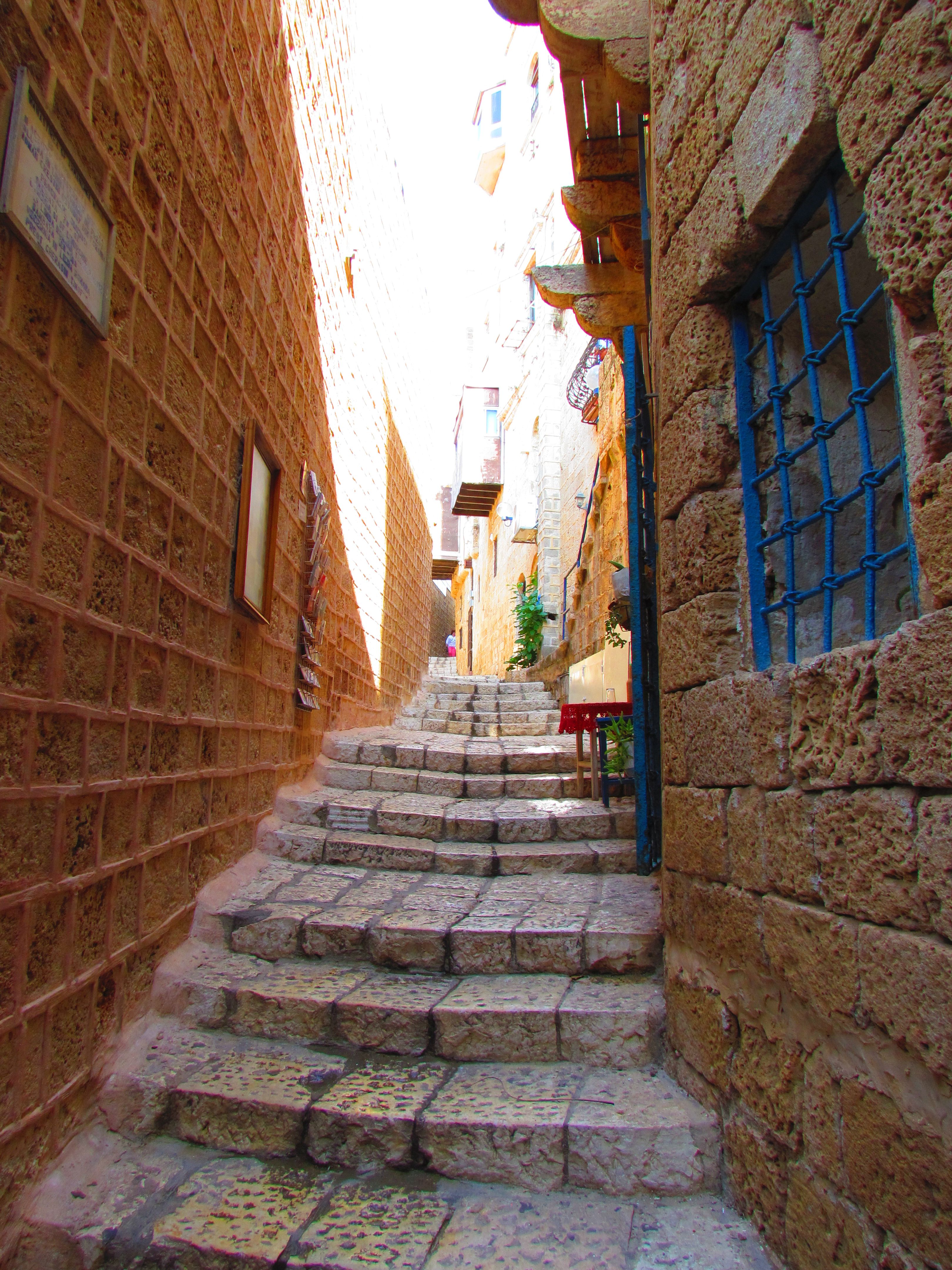 Losing our way and numbers through the Jaffa streets, we decided to rest on the green grass, across from a wonderful panorama, as all good things must come to an end, 5 minutes into our rest, we discovered one drawback of Israel, flies. Have you ever seen flies drawn to light, this is how we felt when trying to rest.

When you can’t sleep in a city port, go and do the next best thing, swim in the sea and explore the shoreline. I did not expect to swim in the sea on a late November, but luck favors the bold and here we are, having the most perfect evening and this being only the first day of the trip, of course, a beer can always improve any beach you are on, no matter how great.

A few hours passed idly by, it was time to return to being a tourist and visit the Medina, as I said earlier, it takes 30 minutes to go anywhere. Half an hour later we arrived in front of the Medina, but I wasn’t prepared for the awesomeness in store for us. The smells, colors, spices, fruits and all the exotic things were a sight for sore eyes. We couldn’t stop ourselves from buying a little of everything, nuts, fruits, spices, you name it, they were in our bags. 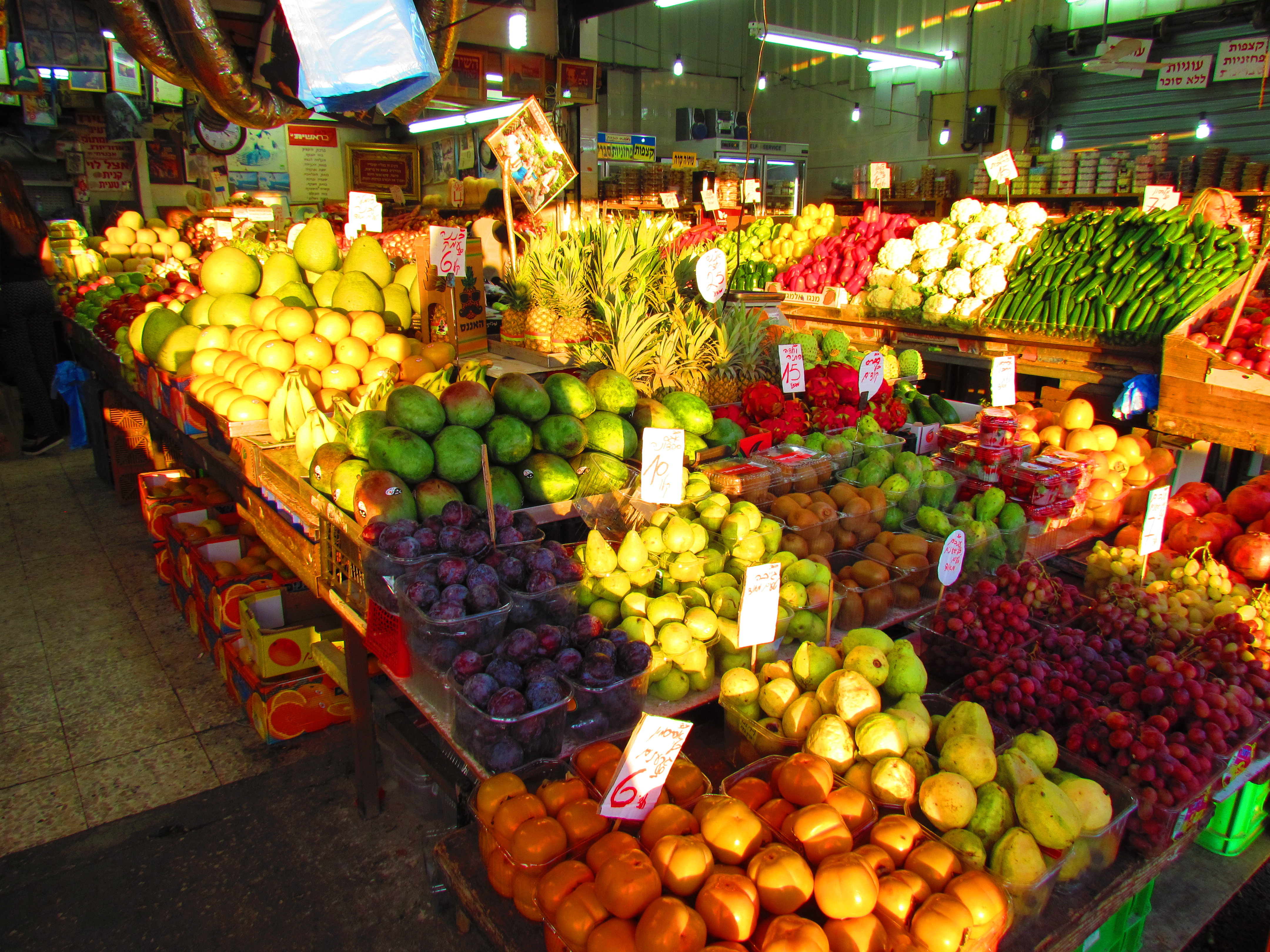 Time goes by so fast when you are enjoying yourself, by the time we went out of the Medina, it was pitch dark outside, half an hour later we were back in our rooms enjoying a well-deserved beer without knowing what adventures fate had in store for us in the upcoming days.